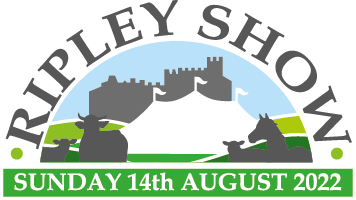 RIPLEY SHOW IS OVER 170 YEARS OLD AND STILL GOING STRONG !

No one knows who first suggested the idea of forming the Ripley & District Agricultural & Horticultural Society in 1849, but the genially eccentric Sir William Amcotts Ingilby was persuaded to become both President and Landlord, and the first show took place in the castle park later that summer.

Attendance in those early years evidently did not match the committee’s ambitions for, in September, 1862 the venue was moved ‘to attract more interest and a larger gate’, to a field belonging to the then Vice-Chairman, a Mr T J Stott, at the back of The Old Swan Hotel in Harrogate. The Leeds Mercury remarked on ‘pigs so fat as to be unable to see or walk’ and a display that included a patent cow-milking machine.

In due course the show was brought back to Ripley. The 1920 show attracted 156 entries, competing for £150 prize money. One visitor, a Mr John Spence, reminisced happily about the 1861 show. In 1921 the Main Ring attraction was a display by Harold Styan’s School of Gymnastics. Features in subsequent years were equally ambitious and varied, if not always successful. Dinghy sailing on the lake seemed like one of the better ideas until their centre boards got stuck in the mud, bringing the proceedings to a rapid and glutinous standstill. Traction engines were popular and useful; when it poured with rain, they helped pull cars through the quagmire. The Society’s first annual dinner was held in 1922, at the Ripley Town Hall. In line with the accepted mores of the period, it was an all male affair; the first ladies were not voted on to the committee until 1970. In 1928 the Society was horrified to find itself overdrawn by £ 41: this doesn’t sound a lot until you realise that it was the equivalent of 27 weeks average pay for a farm worker at the time!

The show was resurrected in 1946 following the Second World War, and became a full day event in 1947. Dog classes were introduced in 1958, but dropped after a few years because the requirements (and the noise) became too invasive; goat classes were a more successful introduction in 1978 although these no longer take place.

Sir Thomas Ingilby Bt. recalls many a happy year at Ripley show “Ripley Show occupies many of my earliest memories. Show Day was a huge event for us children. I dreaded the Mounted Fancy Dress classes, which left me at the mercy of whatever hare-brained scheme my older sisters had dreamt up for me. My “framed and mounted” never entered the ring because the horse took one look at the picture frame and bolted and the following year the girth snapped on the ancient Arabian saddle depositing a startled sheikh, on to the turf in the centre of the ring. That was my final appearance in Mounted Fancy Dress!”

Women have played an increasingly active role in the Society, and in 1996 Kate Smith, an indefatigable supporter of the Society for many years, broke new ground by being elected Chairman. Margaret Liddle followed closely on Kate’s heels.

The Show has weathered a few storms, both literally and figuratively. The foot and mouth epidemic in 2001 led to the cancellation of the show and in 2020 and 2021 there was no show due to the Covid pandemic.

It continues to enjoy, courtesy of Sir Thomas Ingilby Bt and the Ingilby family, one of the finest settings imaginable. Thanks to the dedication and hard work of a succession of Chairmen, Vice Chairmen, Hon. Secretaries, Treasurers and our many volunteers and stewards, the Society remains in excellent health, and we very much look forward to maintaining the Ripley Show legacy for many years to come.